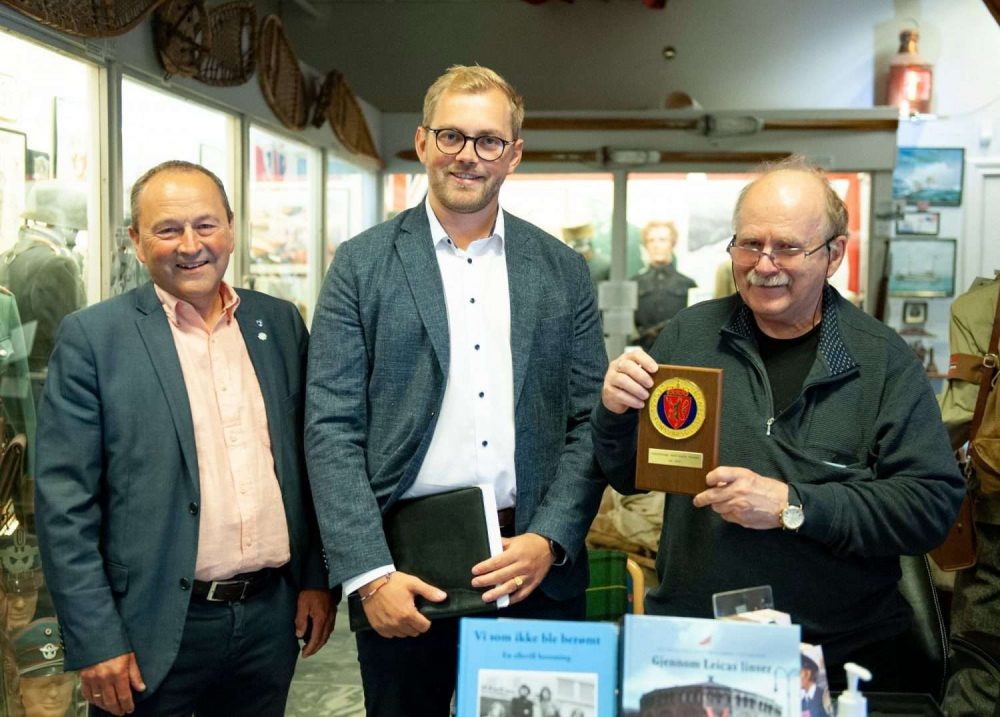 William honored by the government: – Has a communication ability that is unique

– Now I have to take a breather, said a clearly surprised Hakvaag after getting both State Secretary in the Defense Ministry Bent-Joacim Bentzen and the mayor of Vågan, Frank Johnsen, at the door on Tuesday morning. The museum manager was presented with a plaque by the former as a thank you for the job he has done ever since Lofoten War Memorial Museum was established in 1996.

– This recognition goes to special cases and is not something we hand out often, pointed out State Secretary Bentzen, who presented the award on behalf of the Minister of Defence.

– It is time and in its place that the government recognizes the job that William Hakvaag has done. There are many great museums here in the region, but Lofoten War Memorial Museum stands out. Here you are not greeted with many screens of information, but one must instead seek out the information on the countless objects themselves. Every time you come here, you discover something new. I was here for two and a half hours the last time I visited.

Bentzen further points out the importance of Hakvaag’s ability and willingness to tell stories in detail.

– He has a communication ability that is unique. The job he does, especially against young people and youth, is very important – especially with what is now happening in Ukraine as a backdrop. It was not many generations ago Norway was at war, and it is important that the story is told and remembered.

– Hakvaag does a tremendously important job. He has an interest in what he is doing, and also feels an obligation to future generations. Coming to Lofoten War Memorial Museum is therefore a whole experience.

William Hakvaag has previously received the King’s Medal of Merit in 2003 and the Defense Medal with laurel branch in 2017. Tuesday’s award is Hakvaag’s first from the government level.

– Of course, it is very nice to have such recognition. I was totally unprepared and didn’t expect this at all, he says with a smile. Although he claims to be a little modest on his own behalf, Hakvaag sees that the job he has done has been of importance.

– I feel that what I am doing has a lot to do with the youth and their knowledge of history, but also for Norway’s defense capabilities. By conveying our war history, we get a relationship with our own defenses, and the military thus becomes not only something abstract. I think that’s very important.

Hakvaag also tells about busy summer days at the museum, often with large groups of visitors from Norway and abroad going on a tour.

– I’m not going to quit yet. As long as my health holds, I’m going to continue with this work.

Summer is high season for open museums and fun activities with us. Here are tips for 21 places to visit. Happy summer!