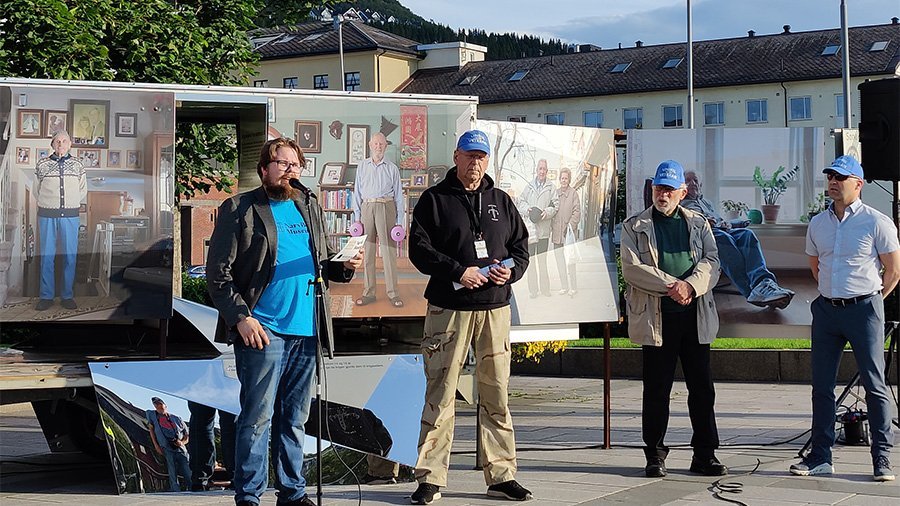 On Monday August 15 in the nice weather there was a ceremony at Rådhusplassen in Narvik in connection with the War Sailors // a traveling exhibition.

Narvik Museum would like to thank the Norwegian Veterans’ Association for International Operations (NVIO) department Ofoten for help both with logistics and the marking around the local opening.

Jostein Pedersen is a board member of NIVO avd Ofoten, and has been the contact person to Narvik Museum during the planning of the exhibition. It was also he who gave the opening speech.
– The war sailor case is of great importance to us in NVIO Ofoten, therefore it was a matter of course for us to contribute to this when we received an invitation to contribute to the opening of a traveling exhibition in Narvik,” says Pedersen.

100,000 Norwegian women and men have served in international operations in over 40 countries, in 4 continents – in 100 different operations, dating back to World War II, including our war sailors. These soldiers are all veterans. They are experienced soldiers with practical experience of demanding missions with puzzle solving under time pressure in complex situations and in the face of difficult value questions. All our veterans are entitled to be looked after and to be met with honor, recognition and respect. The Norwegian Veterans’ Association for International Operations (NVIO) is Norway’s largest veterans’ organisation for military personnel who have participated in international operations on behalf of Norway. NVIO has approximately 7,000 members with local associations across the country. Our purpose is veteran care under the motto Unity – Experience – Strength. NVIO Dept. Ofoten has approximately 70 members and runs various activities, including open member’s room weekly and monthly veteran meetings with both social and professional activities. Of our war sailors, British Admiral Gerald Charles Dickens told the BBC as early as 1941: “Had it not been for the Norwegian merchant fleet, we might as well have asked Hitler for his terms.” Stronger, it can hardly be said. Prime Minister Winston Churchill spoke out in a similar way after the war. It is my assertion that Narvik has Norway’s strongest war history, but the close history of war has unfortunately overshadowed the efforts of the war sailors, even though the municipality had many war sailors – maybe as many as 40.

I personally had the pleasure of getting to know one of them through his last 5 years of life: War sailor Arne Strøm. Arne became a member of NVIO dept. Ofoten in 2014 and was a faithful participant in our membership room in Dronningens gate 43. He stood pretty much every Tuesday at 6pm at the front door and waited, preferably 5 minutes before we opened.

Arne travelled to sea in the Merchant Navy

already at the age of 16 in 1938, when he was hired and patterned on D/S Germa from Kristiansand. He was under the legal age to sign on, and had to bring written consent from his parents. Arne would eventually feel the horrors of war strongly on his body and mind. After undergoing training as a shooter, he was hired as a combined sailor and sniper aboard the M/S Bonneville. There was only one trip on the boat. They sailed in convoy with 57 ships heading for England, chased by 26 German submarines. On March 9 at 10 pm, M/S Bonneville was hit by a torpedo, and it slammed so violently that the entire boat shook its joints. Only 7 men saved their lives, among them Arne. Arne remembered nothing from the torpedo until they were rescued by an escort ship at night. A total of 13 ships were sunk. The torpedoing burned into Arne’s mind, with severe trauma for many years. But Arne continued to sail after the incident, and came on board as a sniper on the M/T Polarsol. On their way to the south of France loaded with aviation fuel, they received airstrikes from starboard. Two English gunmen on board fired grenades that went off right in front of the plane. The plane cut to the right and exploded into an American Liberty boat with 500 soldiers and loaded with ammunition. The explosion was an inferno of flames, smoke, steel parts and rivets. But M/T Polarsol miraculously escaped.

ARNE’S STORY IS NOT UNPRECEDENTED

On the contrary, it is very descriptive of the war sailors’ experiences throughout 5 long war years. It also tells us something about their experiences for the rest of their lives. Arne resigned in 1945 and finished his life at sea. He attended vocational school and trained as a welder and cutters. He got a job at LKAB in Narvik where he worked for 38 years until retirement. Arne married his beloved Solveig in 1946, and they had three children. They settled in Malmveien in Narvik, where they had a good marriage until Solveig passed away in 2006. There is no doubt today that our war sailors did not receive the honour and recognition of the Norwegian authorities that they had earned for their war effort, compared to our other war veterans from World War II. Arne often expressed great bitterness about the injustice he felt, and he therefore engaged strongly in the local branch of the War Sailors’ Association for many years. Arne was born in 1922 and passed away in 2019, aged 97. Neither Narvik municipality nor the armed forces were represented at his funeral. Maybe it was the family’s wish. We shine a light on war sailor Arne Strøm´s memory. With these words, we declare the exhibition open. Thank you for your attention.

The war sailors // a traveling exhibition

From Monday 22th to Friday 26th of August we have extended opening hours at Narvik Museum from 10 am to 6 pm.

Tickets for Narvik Museum can be purchased here. (ticket not needed to see the traveling exhibition)

What part of Vesterålen’s history do you think is important to be told? GaiaVesterålen wonders about this question, and is they immediately in the process of collecting history in Vesterålen.

The Ofotbanen railway was arranged for the first time on Wednesday 18 January at Katterat Station, in collaboration with Arctic Train.

GaiaVesterålen starts the year with a kick-off at the RESIST project in Portugal.