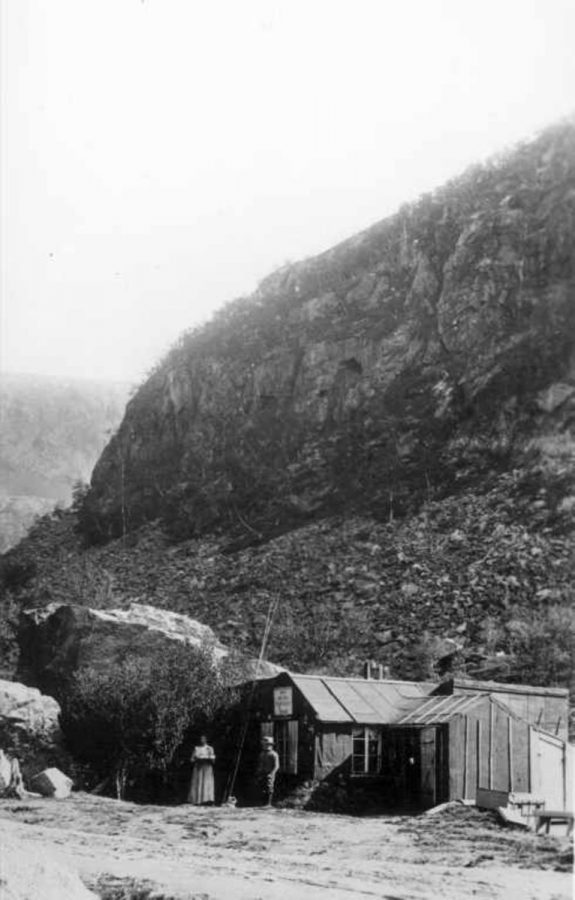 Persson, or Konjak-Nisse, lived with his woman (pictured) just below the Storbrua bridge over the Hundal river along Ofotbanen’s construction road.

“There were a lot of colourful personalities on the track. Most are forgotten, but some live on in history. It can be caused by a special event or, as in this case, a photograph that is preserved.

Persson by the bridge, or Konjakk-Nisse as he was called, was actually named Nils Persson and was a Swedish skysskar. However, he had settled on illegal liquor sales and therefore did not get a drive for NSB and SJ. He built a small house with stables just below the Storbrua bridge over the Hundal River. There he established himself with “Mrs. Persson”, as she was called, and opened a café and performed some private driving for the Rallars.

There are a lot of stories about Persson by the bridge, maybe because there was booze in the picture. At least he should have managed to stay away from the railroad police with all kinds of tricks.” Retrieved from the booklet Hiking on Rallarveien.

The ski train had its heyday in the 1930s, 50s, 60s and 1970s with fully loaded trains up to and down from Bjørnfjell from Narvik station.

When the Ofotbanen railway was built, water towers were needed to provide water for the locomotives in winter. Water towers were built at Straumsnes, Rombak and Katterat.