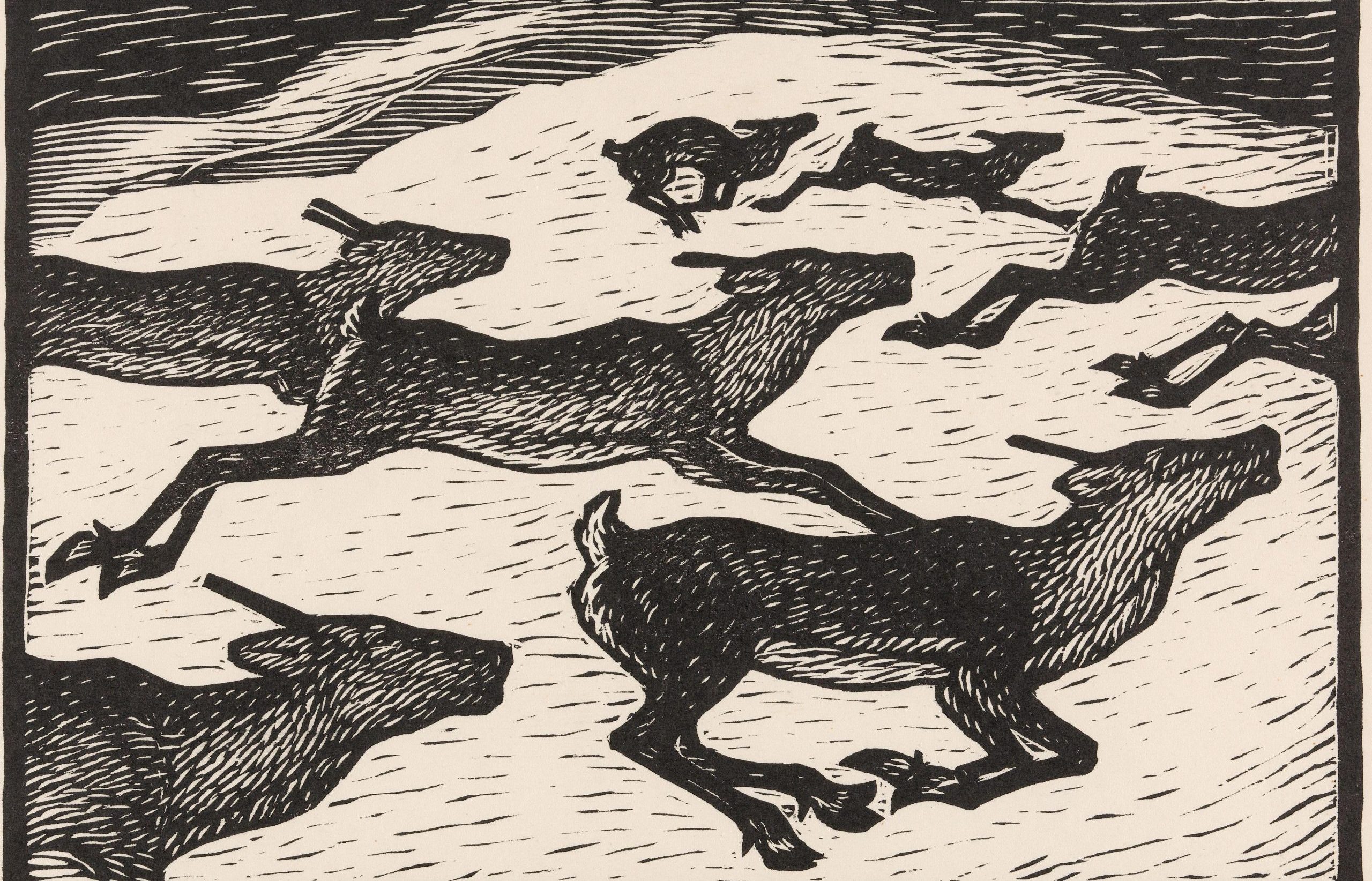 THE BOAT AND THE MOUNTAIN

The summer exhibition The Boat and the Mountain present two different artists who have portrayed northern Norwegian nature and society, John Savio and Kaare Espolin Johnson.

The Sami artist John Andreas Savio (1902–1938) is known for his depictions of Sami life and culture in black and white woodcuts.

The Norwegian artist Kaare Espolin Johnson (1907–1994) is well known for his depictions of living conditions along the northern coast. Espolin worked with a distinctive mixed media technique on paper, and with lithography and serigraphy.

The two artists are of the same generation and both have references to childhood and upbringing in East Finnmark in their works. Both found inspiration for their motifs in observations of the sea and mountain landscapes of Lofoten, of people and villages on the islands. The exhibition contains a representative selection of works by both artists. Due to very different life cycles for the two artists, Espolin Johnsons production is by far more extensive than Savios. However, Savio managed to do much in his short life. Both artists have been influential on art and culture through their depictions on north Norwegian nature and society.

In selecting works of art for the exhibition, the curators have emphasized a shared interest for people, nature, and society of Nordland and Finnmark. Some depictions in the selection indicate that they visited the same places in Lofoten to find inspiration for their motifs. It is obvious that they were both fascinated by this landscape. We find depictions of places like Svolvær, Trollfjorden, Vågakallen and Trenyken at Røst.

The exhibition has works form the Arctic University Museum in Tromsø’s Savio Collection, Bodø Kunstforening and The Espolin Gallery’s own collection. It provides a broad presentation of how the two artists work with subjects and with different printmaking techniques. Such as woodcut, lithography, and silkscreen, and other techniques such as drawings and watercolors.

The exhibition is curated by Kristoffer Dolmen, director of Sámi Dáiddaguovddáš (Sami Center for Contemporary Art) in Karasjok and Malin Overholth, curator at Museum Nord.

The year before the Covid pandemic, the Espolin Gallery showed an exhibition from the Sami Center for Contemporary Art with prints by several Sami artists. Savio was also represented in this exhibition – and working on this exhibition inspired the idea of bringing Savio and Espolin Johnson together. With a closer look through the Arctic University Museum in Tromsø’s Savio Collection, the curators found more meeting points between the two artists that reinforced the interest in creating an exhibition with a main emphasis on their work within fine art printmaking.

Although the artists lived and travelled in the same areas, it is not known that they were acquaintances. Artistically they unite, their expressions suit each other, and one can see influences from the same leading artists of the time in both.

They both worked with printmaking and created multiple examples of their pictures that have reached many homes, also in northern Norway. Their motifs are also reproduced in books, on posters, and in calendars. They are artists who the public are reminded of in various contexts, also outside the gallery space. Their art has an appeal to still new audiences.

The exhibition is on display until August 14th

John Andreas Savio was born in 1902 in Bugøyfjord in Finnmark. He became an orphan at the age of three. Savio grew up with his grandparents who were reindeer owners and ran a shop. He showed creative and artistic talent at an early age. It is said that Savio’s first known drawing of a reindeer was made in his grandmother’s bible when he was four years old.

He went to high school in Vardø and in Bodø before moving to Oslo where he followed classes at the Norwegian National Academy of Crafts and Art Industry. In Oslo, Savio longed both home and abroad. He travelled to Finnmark, to Tromsø, Lofoten and stayed for a longer period in Paris.

The stories of his adult life as an artist revolve around poverty, illness, and tuberculosis. He had little money and went from door to door selling his woodcuts. Savio died in 1938, just 36 years old, in the early stages of his artistic career. His life and work had, nevertheless, fundamental significance for Sami art and identity.

Savio is regarded as the first professional Sami artist, widely known for his Sami motifs. He depicts Sami people in their daily life when hunting, herding reindeer, at home and in the countryside, under threatening forces and in encounters with love. Still, Savio’s visual world extends beyond the Sami. People, animals, and nature appear in diverse compositions and surroundings. The selection of pictures in this exhibition shows this diversity, from depictions of mountain landscapes and villages from Lofoten, to the work Venus de Molo and Evening at the Plateau (NO: Høstkveld på Vidda).

Seen as a whole, Savio’s artistic practice bears witness to his ties to northern Norway. The woodcuts by John Savio were the first modern Sami art expressions and give us a unique artistic insight into Sami everyday life from the early 20th century. In addition to woodcut, he worked with linoleum cuts, drawing, watercolour, and oil painting.

Savio’s woodcuts are characterized by a simple but varied carving style, with emphasis on the contrast between black and white. In several cases, we know of drawings that indicates they have been transferred to the woodblock before he has carved the motif. With simple methods, he made about 150 different motifs in woodcuts and linoleum cuts during his short life. He printed the woodcuts in black and white. He also hand-coloured several of them. Some in strongly hued watercolours most likely inspired by the colours of the Sami costumes.

Savio sought inspiration in the art by Nikolai Astrup and Edvard Munch. He was inspired by Munch’s expressive style and his work with woodcuts. One can also see a resemblance to Gustav Vigeland’s woodcuts. Savio creates a tension between compositions that depict drama and movement, and more stylistic compositions that support the calm of the motif.

In 1930 he had his debut with a solo exhibition in Tromsø. From 1933 he travelled abroad several times, and in 1936 an exhibition of Savio’s art was held in Paris. In 1939 and 1941, memorial exhibitions of Savio’s work were held in Oslo.

Today Savio’s woodcuts are well known and in high demand. He is represented in several collections in Norway, in particular The Arctic University Museum of Tromsø and The Savio Museum in Kirkenes has numerous and versatile collections of his art.

Kaare Espolin Johnson was born in 1907 in Surnadal, Møre og Romsdal. At the age of two the family moved to Finnmark, to Jarfjord and then to Vadsø. He showed artistic talent early on. His childhood years in Finnmark were followed by adolescence in Bodø before he attended the Norwegian National Academy of Crafts and Art Industry in Oslo.

Life as a poor and unknown artist was not easy in the 1930s. He took drawing assignments and sold individual work. It was through illustrations for a Norwegian magazine, Arbeidermagasinet for Alle, and as a book illustrator that he first found his audience.

Espolin Johnson had poor eyesight from childhood. In 1941 he lost sight in one eye and developed cataracts in the other. Thus, he saw few colors, and concentrated on lines and compositions, light and dark.

Espolin Johnson worked with a unique mixed media technique on paper, and with lithography and serigraphy. Particularly well known are his depictions of the coastal environment and the toil and dangerous lives of fishermen through generations. Central to his motives is man’s dependence on nature and the sea, and his struggle against the forces of nature.

Espolins motifs often use dramatic means in composition and technique, and a limited color palette where the play between light and dark is central. In other motifs, it is more interpersonal relationships that are portrayed in poetic depictions. Often with reference to his childhood in Finnmark, with experiences of the nature and light of the plateau and the many different people that were there. Landscapes and people moving toward the mythical realm also belong to his world of images.

But the experience of the Lofoten landscape and the forces of nature made a deep impact on Espolin. His first trip to Lofoten was in 1952, when he visited Svolvær and the island communities of Værøy and Røst. With view towards the special and mythical rock formation Trenyken, the artist studied rocks, erosions, shifts in light and movements in the sea. Traditional Nordland boats and fishing methods were also an inspiration. The fishermen’s tiring and dangerous lives through generations became strong motives.

Espolin Johnson was highly regarded in his day. He participated for several years in the National Art Exhibition Høstutstillingen, and several group exhibitions. He exhibited with organizations as Tegneforbundet and Norske Grafikere in Scandinavia and took part in exhibitions in USA and Yugoslavia. Espolin Johnson is represented in several collections in Norway, in the National Museum and in the Espolin Gallery, dedicated to the life and works of the artist.