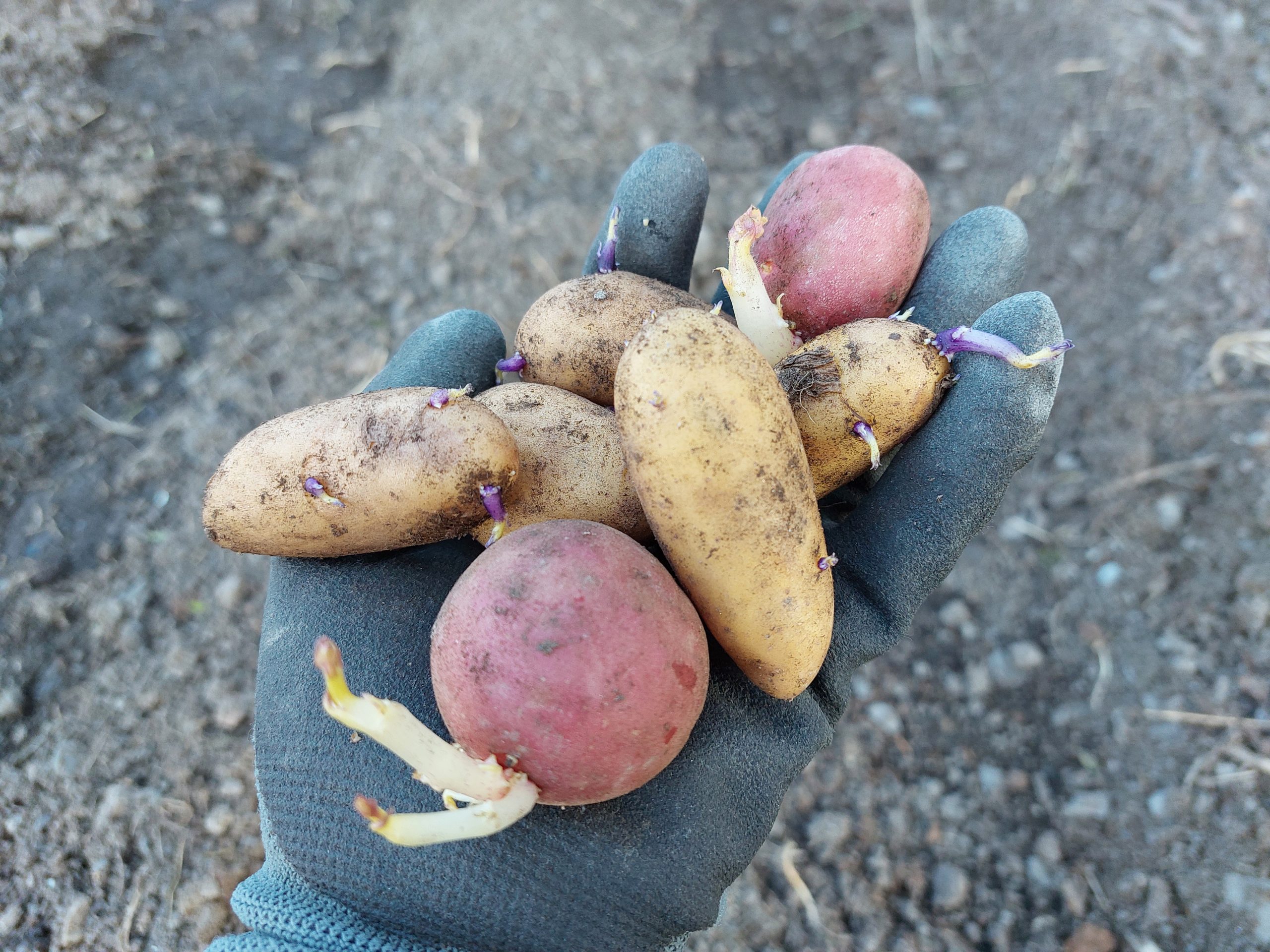 “Have you planted the potato?,” was a common question people in between at this time of year. But that was before. Now most people buy the potatos at the store. In Innlandet in Vesterålen, it was quite common to put a potato variety called Fangen. Is there anyone still using this potato variety?

The story of Stener August Fangen, after whom the potatos are named, I found in Hofdasegl. Berit Vangen has written this about the engineer who lived at Kaljorda:

Rock engineer S.A. Fangen was a priest’s son from Eastern Norway. He was educated in England. He was a man who both seemed and sounded in the landscape. In England, he got the nickname “the Norwegian bear”. There he ran a time as a mining engineer and partly as a businessman. For the first few years at home in Norway he worked on the Bergen Railway. He later also worked in Svalbard.

Then an English company, first in the 20th century, started mining on the Kaljord field, and he was hired as an engineer here. On Tøa, between Kaljord and Feltet, he found a gem of a plot of land, and here he built. He loved this place, and in the rock behind the house he painted “Miner’s rest”. The picture to the west is the most beautiful painting, both in storm and maximum weather, seeing Hadselfjorden in the finest frame imaginable. He claimed the view was so nice that he could see the little girls walking on the jetty in Liverpool. The plot is sheltered by rocks, large rocks and mounds, and in the west Bukkeberget goes straight into the sea.

In this pot it healed under Fangen’s fingers. He had an open eye for all the beautiful things in nature, for the colours and for the wildness of the Northern Norwegian landscape. On his many travels, he collected rare plants, and these grew and enjoyed themselves in the particularly favorable conditions. His garden was a sight, a wealth of the most beautiful perennials. Fangen was interested in everything that grew.

From Scotland, he took home a potato that is supposed to be called “Erlain Melodia” or “Erlain Puritan”. This is an early potato that has literally taken root in Innlandet. We call it Fangen, and it’s a very nice potato. Little did the good rock engineer know that he was going to have such a tasty legacy. It is also said that he received a black almond potato from Russia, but if this particular kind still exists, I do not know..

Dean Nielsen refers to the house at Tøa as an artist’s home, and Fangen as a big, strong giant with the soft mind of the child. This soft mind is evident in his care for the village and its people. It is said that when a married couple were expecting their 9th child, he paid his housekeeper to sew equipment of all kinds to the new citizen of the world. “Now only the child is missing!”, he said as he pleasedly admired the result of Ms. Eriksen’s diligent hand.

He bought a party for the kids in the village, in the school building. Whether he was present himself is not known, but people talked for a long time about the Fangen Party, cakes, crackers and cocoa were on the menu. I don’t think this was just a one-off.

A fellow villager told me that he worked on Fangen’s peat mound. During the food break, the boss discovered that Miss Eriksen made a difference between his food and that of the working people. He accused this and demanded that she serve everyone equally.

Fangen was probably a fresh element in an otherwise confined rural community. He was a prominent figure. The following little episode shows that people were concerned about him. He had received some goods ashore at Kvitnes, and a man tells the following to his neighbor: “Today there is a great fuss in Kaljorda. Fangen has got a big heel load with loads of things!”

The care of the old workers was great. One of them was laying on his death bed, and Fangen sent for the priest. But Hadselfjorden was probably wider at that time purely communication-wise. And the priest didn’t see any time to come. Some time later, the priest and engineer met at Stokmarknes. How’s the old man? the priest wanted to know. An answer came prompt: “You didn’t come for f..! The old man is dead!” There was nothing more to say about that case.

After mining ended, apparently when The First World War began, Fangen worked in the Norwegian Port Authority. He then helped to build the pier in Kiberg in Finnmark. But he was heavily entrenched in the home at Tøa, and he had many plans to start employment in Vesterålen. One of the projects was a peat factory in Hognfjorden. A lot of young people from Hennes got work there. The peat was mainly used on the steam fleet towards the end and just after The First World War.

In the 20’s, he tried his way to a canned food factory. It was fish buns he bet on, likewise grouse. It was hardly a lucrative business, but for a while it was a workplace for the village’s young girls.

Fangen loved to read and to keep up with what was happening around him. His son Ronald was both a writer and a book critic, and Fangen had there through a rich access to what was moving in literature. Ronald Fangen constantly sent home books that his father read, lent on to his friends and then discussed.

The names of the other sons were probably Stener, Kristian and Lilo. One of these became a mining engineer like his father and went to South America.

When Fangen died on September 1, 1935, his housekeeper inherited the house. It was demolished and moved to Helgeland, probably Vega. But the walls stand, and the view is still amazing!

Dean Nielsen has written a beautiful obituary of engineer Fangen. He concludes with a lovely little story that I think gives a nice picture of “the Norwegian bear”: “A strange little boy had once stroked his cheek. Nielsen spoke of that and recalled just into the death throes.”

He was buried in the northwestern part of Tajorda Cemetery in Hadsel. A simple stone marks the tomb.”

SKREI Stories: A HISTORY OF CONNECTEDNESS

Visit our online exhibition about the past, the present and the future of the Atlantic Cod.